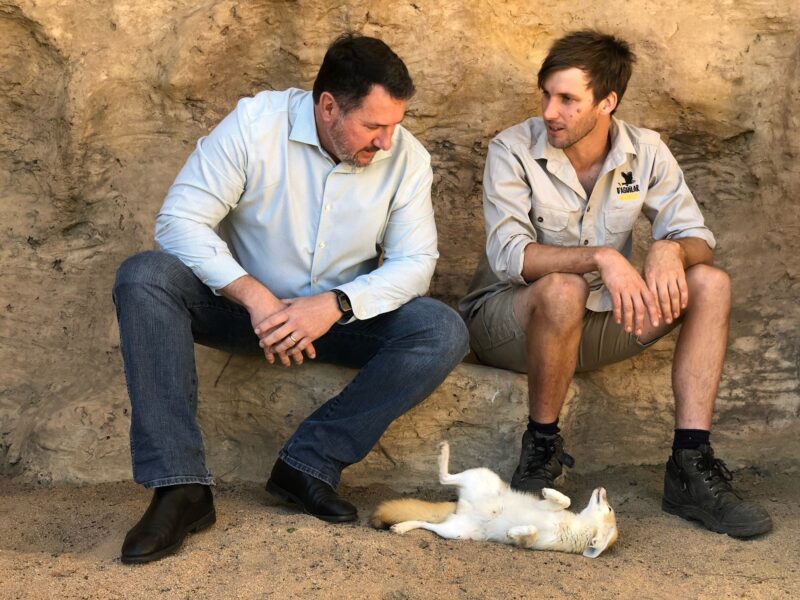 Member for Glass House Andrew Powell has slammed the State Government for their involvement in local wildlife exhibitor Ben Bawden being forced to ship all of his exotic animals to interstate zoos.

Ben, of D’Aguilar Wildlife in Wamuran, has grown his enterprise over the last eight years from mobile wildlife displays, to providing animals for filming, to now building a state of the art facility for visitors to get up close and personal with native and foreign animals.

“The Department of Agriculture gave Ben a permit to house category C2 animals when Ben first moved to Wamuran. But they’ve significantly shifted the goal posts on him and are now tying him up in red tape – red tape that has seen him having to relocate the majority of his animals to zoos in NSW,” said Mr Powell.

Category C2 species are animals that are non-indigenous to Australia. Many of the approximately 250 at D’Aguilar Wildlife fall under this category.

The local council also originally welcomed Ben and his animal friends but subsequently determined D’Aguilar Wildlife was technically a “zoo” and would have to submit a Material Change of Use (MCU) Application Development Application (DA).

“I had no problem with this and started the application process, but then COVID hit and just crippled the wildlife exhibitor’s industry. I couldn’t realistically keep up with their deadline for the DA,” said Mr Bawden.

“The problem is that when I was given a permit to keep these animals, I acquired them as soon as possible, and now the Department are telling me I’m not allowed to keep them until the DA is approved, and they’re refusing to grant an extension to the deadline despite me pointing out that I took a giant hit to the business during the height of COVID,” continued Mr Bawden.

“My priority for most of 2020 was keeping the business financially afloat so that I could afford to feed all my animals!”

“The soonest Council can approve Ben’s DA is in three months’ time.  Instead of working with Ben to come up with a temporary permit, Ben has had to scramble to get all of his non-native animals into other zoos, zoos that have generously agreed to keep the animals until Ben is ready to take them back,” said Mr Powell.

“At a time when this Government should be doing all it can to help businesses get ahead, they’re hell bent on shutting this one down.”

“My animals are my family’s livelihood. We spoil them rotten. I just don’t understand how it’s in the interest of animal welfare to put them through multiple relocations in a number of months when they could stay safe, happy and healthy with us until the DA is approved,” finished Mr Bawden.

“The Department have rules and procedures they need to follow. I understand that. But they’ve wrapped D’Aguilar Wildlife up so tightly in red tape that they’re in danger of shutting this business down. If they just worked with Ben instead of against him, they would be helping to open a business that will significantly boost tourism to the Moreton Bay region,” concluded Mr Powell.