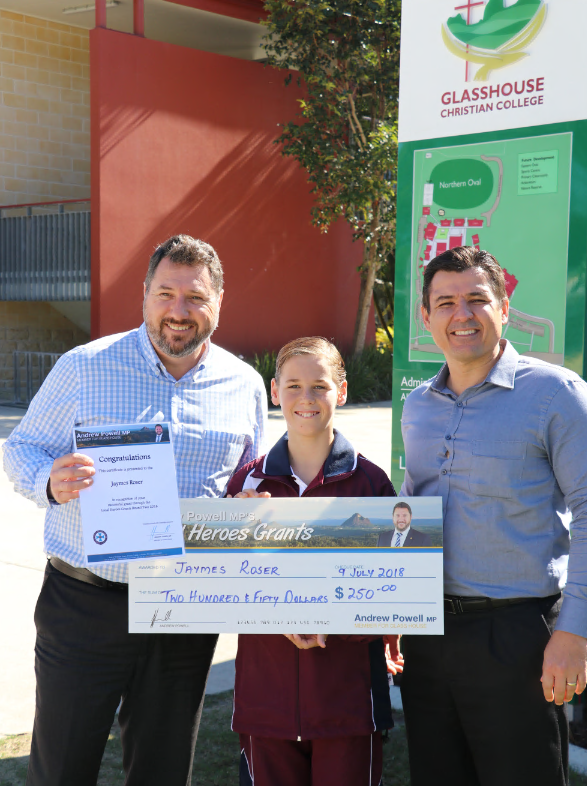 Member for Glass House Andrew Powell is excited to announce the winners of the second round of his 2018 ‘Local Heroes’ grants. Four lots of $250 are available for individuals or groups in the electorate, four times a year, and Mr Powell is very pleased with the calibre of this round’s applications.

This round’s winners are the Palmwoods Netball Club, ‘MooFest’, Studio 23 and Jaymes Roser from the Maleny Swimming Club.

At the tender young age of 12, Jaymes Roser has been selected to represent Queensland at the National Swimming Titles in August this year.

“Jaymes is one of just four kids who has been selected to represent the Sunshine State in Hobart later this year. We have so much talent in Glass House!” said Mr Powell.

Currently in grade 7 and having only been swimming competitively for the past two years, it’s safe to say that Jaymes is doing exceptionally well.

“I had a little chat with Jaymes when I presented him with his Local Heroes grant and he informed me that his swimming heroes are Michael Phelps and his Dad, who also happens to be his swim coach.”

“Watch this space Glass House, we have a future Olympic champion in our midst,” stated Mr Powell.

Jaymes trains a minimum of six two-hour-sessions a week and is sure to ‘up the ante’ in the lead up to the National Titles which run from the 26th July through to the 1st August this year.

Mr Powell wishes Jaymes the absolute best of luck in the upcoming competition and looks forward to hearing the results when he returns home.

“There are still two rounds (eight lots of $250) up for grabs in my Local Heroes grants this year. Head over to my website at http://www.andrewpowell.com.au to apply,” Mr Powell concluded.