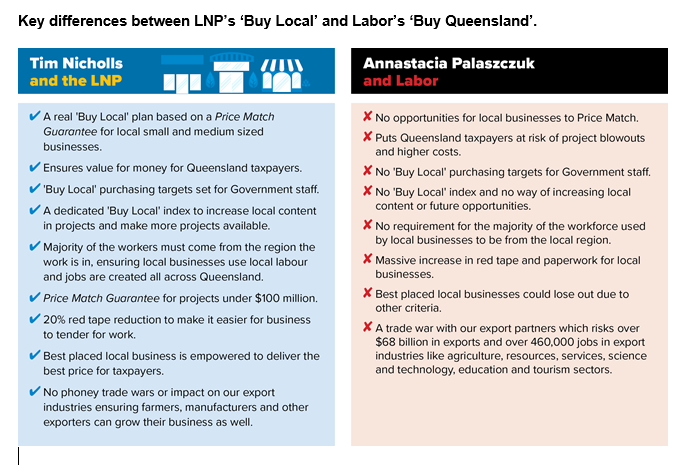 Andrew Powell, Member for Glass House, is a big fan of Small Businesses in Glass House and that is why he is excited that the LNP’s ‘Buy Local” procurement policy will produce more local jobs, cut 20% of red tape for businesses to tender for work, and ensure value for money for Queensland taxpayers.

Mr Powell said that Buy Local would not only prioritise local jobs but give hard working Queensland taxpayers best bang for their buck.

“I want to see more local jobs in Glass House and our policy will deliver. Buy Local will give local businesses a real hand up, not a hand out, and create more local jobs,” Mr Powell said.

“The LNP’s ‘Buy Local’ policy puts Queensland jobs and Queenslanders first and on Government projects under $100 million, whether that’s desks for a school or building a new road, we will give only true Queensland firms a price match guarantee.

“If a local business that’s headquartered in Queensland and has a workforce in the project area matches the lowest bid – they’ll get the job,” he said.

Buy Local covers 99 percent of local businesses in Queensland. These are small to medium enterprises employing less than 200 staff.

Mr Powell said it is about creating more local jobs and the LNP’s Buy Local attitude will put Queensland jobs, businesses and taxpayers first. He said the policy differences between the LNP and Labor could not be clearer.

“Unlike Annastacia Palaszczuk’s inexperienced and unworkable ‘Buy Queensland’ policy, we won’t allow blow-ins from interstate and overseas to take advantage by simply having a workforce in Queensland.

“Labor’s inept policy also jeopardises the jobs of thousands of Queenslanders who rely on our $68 billion trade industry – and could potentially cost taxpayers millions.

“The LNP won’t stand by and watch Queenslander’s jobs be put in danger by an inexperienced Annastacia Palaszczuk. Her thought bubble doesn’t favour Queensland firms or taxpayers and it certainly doesn’t create jobs,” Mr Powell concluded.

To learn more about Our Plan visit betterqueensland.org.au/buylocal