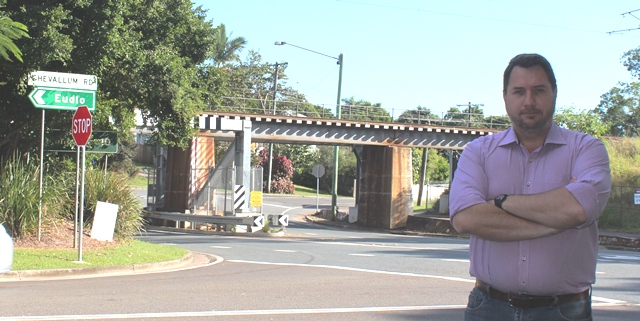 When Andrew Powell MP, Member for Glass House, launched his ‘Fighting for Glass House’ campaign earlier this year, one of the first items on the agenda were improvements at the Jubilee Drive intersection in Palmwoods.

“The Palmwoods community have been seeking improvements at this intersection for years and it really is a no-brainer.  This intersection is just plain dangerous even outside of peak traffic times.

“Essentially this community is in a holding pattern until the North Coast Rail Duplication is completed but with the current government refusing to take responsibility for the duplication and cough up any money I suggested they consider looking at improvements to this intersection as a standalone project,” Mr Powell said.

After writing to the Minister in May, Mr Powell finally got a reply in late August that advised – due to a lack of accidents at this intersection – it was not high on the priority list.

“To be honest, I’m outraged.  I am shocked they apply this sort of approach and can’t understand why they don’t take preventative measures in these sorts of cases so that we can avoid any tragic accidents occurring in the future.

“I recently discussed the intersection with the Palmwoods Business and Community Association. As I said then, I’m open to community suggestions. Some relief will come with the Sunshine Coast Council’s place making upgrades and a subsequent speed reduction but I am interested in knowing what other ideas exist out there.

“I’m encouraging community members in Palmwoods and surrounds to get in touch with my office to show your support for and make suggestions on changes at Jubilee Drive.  If we can gather enough community momentum, I know we can show the government how desperately we need these safety improvements.

Mr Powell can be emailed at glass.house@parliament.qld.gov.au