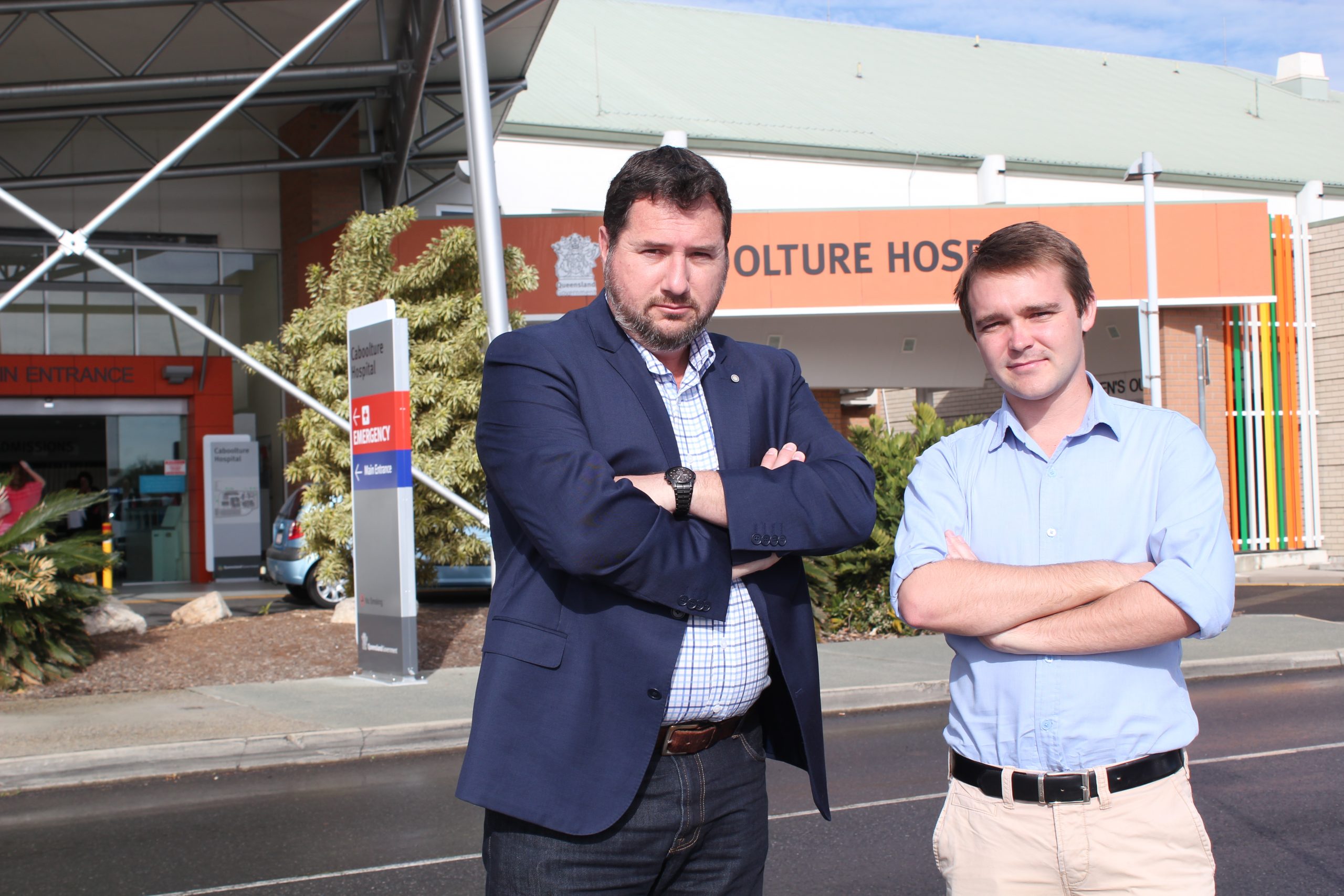 Local MPs Andrew Powell and Wyatt Roy are demanding to know why an $11.7 million Caboolture Hospital expansion – involving 32 extra hospital beds and up to 15 more emergency treatment spaces – has been dumped by the Palaszczuk government.
Mr Powell, the state member for Glass House, unveiled the project during January’s Queensland election campaign along with then Health Minister Lawrence Springborg and former state members Lisa France (Pumicestone) and Darren Grimwade (Morayfield).
But Mr Powell and Longman federal MP Mr Roy say the plan vanished in the new state Labor government’s first budget.
“We vowed to boost Caboolture Hospital’s frontline services under a re-elected LNP government – on top of a commitment to build an additional 100 car parking spaces,” Mr Powell said.
“The entire upgrade was locked in to the forward budget and not linked to asset sales.”

Sixteen extra general medicine beds, 12 cardiac beds and 4 coronary beds were set to be delivered for $7.2 million. A further $4.5 million would have boosted the ED treatment spaces from 30 to 45 – a 50 per cent increase.

“If you talk to any of the clinical staff at Caboolture Hospital, they would tell you how desperately needed these upgrades are and how relieved they were to know they had been approved and budgeted,” Mr Powell said.

He and Mr Roy are now calling on local Labor state members to guarantee the extra beds and car park will go ahead.
“While Labor is great at the political spin and lies, the facts speak for themselves – under the former LNP state government, there were 75 more nurses and 122 more clinical staff at Caboolture Hospital than previously,” Mr Roy said.

“Now, with Caboolture Hospital treating more patients than ever before, it is absolutely vital that our local doctors and nurses get this further injection of resources.

“But not a dollar has been allocated by the current Labor state government to a vital expansion of beds within the specialist facilities that the health of our community depends on.”
Mr Roy said budget papers showed 1041 more nurses in Queensland hospitals during the Newman government than in the previous Bligh Labor government.

He said in the last election campaign the Newman government had also pledged 2654 extra doctors, nurses and health practitioners over the next three years.

“Meanwhile, the federal Coalition government is increasing funding to Queensland hospitals by 27 per cent over the next four years,” Mr Roy said.

“And Queensland’s GST share will grow by 48 per cent or $5.6 billion over the next four years.”

The weather event that occurred in South East Queensland on Friday 1 May will long live in the memory of many Queenslanders.  Residents in Caboolture were one of the hardest...

Free Breast Cancer Screening will be held in Maleny from 14 May to 4 June at the Maleny Hospital. The service is available to women aged 40 years and over....